End of the line - so long and thanks for all of the fish (although I don't like eating fish ...)

This is my last post. For reasons that I am not prepared to divulge I no longer wish to identify as autistic. Henceforth I shall be merely geeky.  I am, of course, autistic in the medical sense, but I wish to try and recapture a flavour of my pre-autism days.  I'll also be fully supporting Master Logic who needs all of the help he can get in working through his difficult teenage years.

The period between December 2013 (the fight with over another parent over filming with an iPad at Master Logic's primary school) through to my two formal diagnoses - the brief, but powerful NHS one undertaken by the excellent Dr Elizabeth Kilbey via Oxleas in April 2015 and the private one funded via the civil service and undertaken by Dr Ken Greaves in May 2015 have been an enlightening read.  That said, until December 2013 I knew that something was wrong, but not enough to re-assess my entire life about. Hindsight's an amazing thing, but I'd like to try and be less autistic if I possibly can?

I've gone full cycle - it's August 2021 now and I'm a proud mum on the spectrum and a geekess; I'm happy with that.  I cannot mix with certain adults on the spectrum, but some are absolutely lovely and I am hoping to keep in contact with them.

It's been emotional - farewell and thank you for reading.

Posted by Publicservicefunblogs at 01:57 2 comments:

Whatever happened in 2017 must have been a continuation of the previous year, well, that goes without saying I guess?  I'm pretty sure that I must have either joined the adult autism charity in this year or 2016 - actually, I think that it may have been late 2016, so I'll amend that particular blog entry. I know from my email records that the first meeting I attended of my borough's Autism Partnership Board (APB) in November 2017.  I found it an odd concept and something which promised much but delivered very little in retrospect.

So - an adult charity this time eh?  How did it differ from the children's groups?  Well, let's just say it wasn't an easy group to mix in with.  I'm pretty high functioning and therefore find it difficult to gauge the level of conversation so those with a learning disability can understand what on earth I am saying.  I don't struggle with guys like my brother-in-law because I'm used to him and he's pretty non-verbal anyway.  Some of the attendees were lovely though and really welcoming.  The Chair, let's call her Janey, was a bit odd though - incredibly self-assured and opinionated without having any academic background to her supposed professionalism.

So, in late 2017 I tried another adult autism charity and got involved with the running of it.  It didn't work and I left in summer 2018 around the same time my beloved family cat, Tilly, was put to sleep.  I also sought a diagnosis of bipolar during this time but it was decided that I was unipolar in January 2019.

In September 2019 I was shouted out in the reception area of the Civic Offices by the woman who runs the adult autism charity.  The background to this furore was that, as co-chair, I wanted to attend the charity's training course which was aimed at council employees who had direct contact with clients on the spectrum, but because of beef the previous year, the woman thought that I was a spy and started shouting at me.  This made me almost burst into tears but I managed to get through the training course.  I reported this behaviour to the council and they spoke to the charity woman a few days later.  The charity woman never turned up to another autism partnership board meeting ever again and her sidekick left too.

I cannot really recall much else; during 2020 COVID-19 happened and the Board didn't meet for about six months until they got their act together and arranged a meet via Microsoft Teams.  This meeting lasted for far too long as there was six months of stuff to deal with.  People started leaving the Board, it got smaller and smaller and the same old stuff kept coming up month after month.  I started feeling more and more sick about attending, even remotely.

In 2020 I also joined another adult autism charity in another borough; they meet via Zoom or Skype and have a virtual pub night on there every month.  I quite enjoyed meeting new people and trying to suss out who everyone was.  I attended sporadically during 2020.  In early 2021 I developed clinical depression as a result of re-applying for my Personal Independence Payment (PIP) but I still attended, keeping a low profile and learning about the other members.  When my mood switched to hyper from late June/early July onwards I was much more bombastic within the group and started to make enemies.  I won't bore you, but I wanted to organise some mental health support for adults on the spectrum and I was going to undertake it with the help of this charity and one in my resident borough.  I joined the committee as a volunteer and bad stuff started to happen.  One of them was via one of those people whom I won't go into any more detail about and the other was, well, dealing with other people on the spectrum - I just cannot.

It all ended in tears yet again - I've gone now and quite frankly, wish to rescind my autism diagnosis.

Posted by Publicservicefunblogs at 02:18 No comments:

What I have been doing post redundancy - part one

So, it's 2016 and I'm no longer working as a civil servant; this is both good and bad.  Good because I have some kind of stability at home, but bad because my main sense of worth was achieved via my career.  On the very day the rock star Prince died, 21st April 2016, I had my first grand mal fit which was caused by a huge prescribed dose of Vitamin D mixed with my stomach acid medicine, Ranatadine.  I was rushed to hospital and given electrolytes to re-hydrate my system.  I was under the care of the neurologist for about five years, seeing him annually and having an ECG at King's College Hospital, but no problems were found.  I didn't suffer any further fits until July 2021, some five years later.

Oh well.  I believe that it's later in 2016 when I make an attempt to join my local National Autistic Society (NAS) branch as a volunteer and end up creating their website.  The lady who taught me was lovely, was a cancer survivor, a great mum and an animal lover and I felt very welcome. Unfortunately, this lady was part of a sister charity and I didn't really like the NAS committee or the committee meetings because I found them to be both cliquey and disorganized - surely having huge swathes of paper littering up one's dining room table isn't particularly professional?

So, after two or three months on the NAS committee I started to feel like a spare part.  I completed the first tranche of the website work and allowed Mr Logic, my husband, to show it to them as I felt too Aspie to attend that particular meeting.  I used a couple of open access Facebook pictures on there and Mr L said that two members of the committee hit the roof and asked me to take them down with immediate effect.  Quite frankly if you don't want your pictures used online then don't upload them to Facebook.  Me and Mr L resigned from the committee with immediate effect.  I also made a complaint to the Branch Officer regarding the shoddy way I was treated as an autistic woman.  She did nothing much about it.

Posted by Publicservicefunblogs at 01:41 No comments:

Yes it's that time of year again where everything is winding down towards the school summer break. Master Logic is going bonkers on it, more's the pity.

Have I just emerged from a period of clinical depression caused by applying for my third attempt at obtaining Personal Independence Payment (PIP). Yes is the answer. Anyway, I completed the 'phone assessment last Thursday but I don't expect a favourable result.  Nope, nothing, nada, not a bean for poor old Mrs Logic - boo!

Posted by Publicservicefunblogs at 13:52 No comments:

Yes it is, the calendar told me so and by that, I mean the Gregorian calendar, not the Julian, which according to Wikipedia, would mean that today is 19th February 2021 and not 7th March 2021. I wouldn't mind trying to regain those lost couple of weeks though - well, perhaps not - it's still Lockdown and the winter lingers on. The calendars I do use are Google and Samsung, although I'll probably just use the former as the latter doesn't link into Zoom, Skype or MS Team Meetings, which is a PITA.

I developed the lung lurgy last week and was laid up in bed with it, but the upshot is that my body is so many hours of sleep in credit that it didn't let me sleep at all last night - not a wink, not a snooze and certainly not a doze - nada, nothing.  It wasn't COVID-19 by the way - whenever anyone has a sniffle, that's what people think, but no, it's not that.  Anyway, I filled the wee small hours by watching re-runs of series four of the late lamented UK police procedural show The Bill.  This was first shown on ITV back in 1988, so I almost certainly watched it at the time - it's not as though as I had much to do as a geeky suburban teenager, in fact, PC Pete Ramsey looks slightly like my late elder brother, but my sibling didn't drive a vintage Porsche during the 1980s, in fact I think that he never managed to pass his driving test.

The trouble with doing strange art projects during the night is that by the cold light of day, they're ... odd. 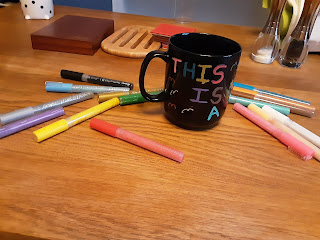 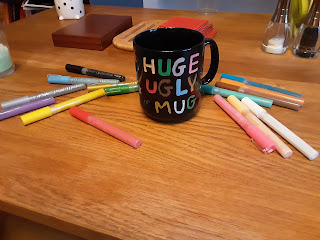 I suppose that it was kinda necessary to test out the pens, but hey - art and design isn't really my bag or indeed my large black ugly mug.

Posted by Publicservicefunblogs at 07:44 No comments:

I received my email copy of one of the local disability charity's monthly newsletters today. Last month, in my post entitled The Rules I basically whinged about how I was scolded for breaking the one of the codes on their private Facebook group.  I'm not sure whether it was just that which triggered this particular link to them as an aide memoire? 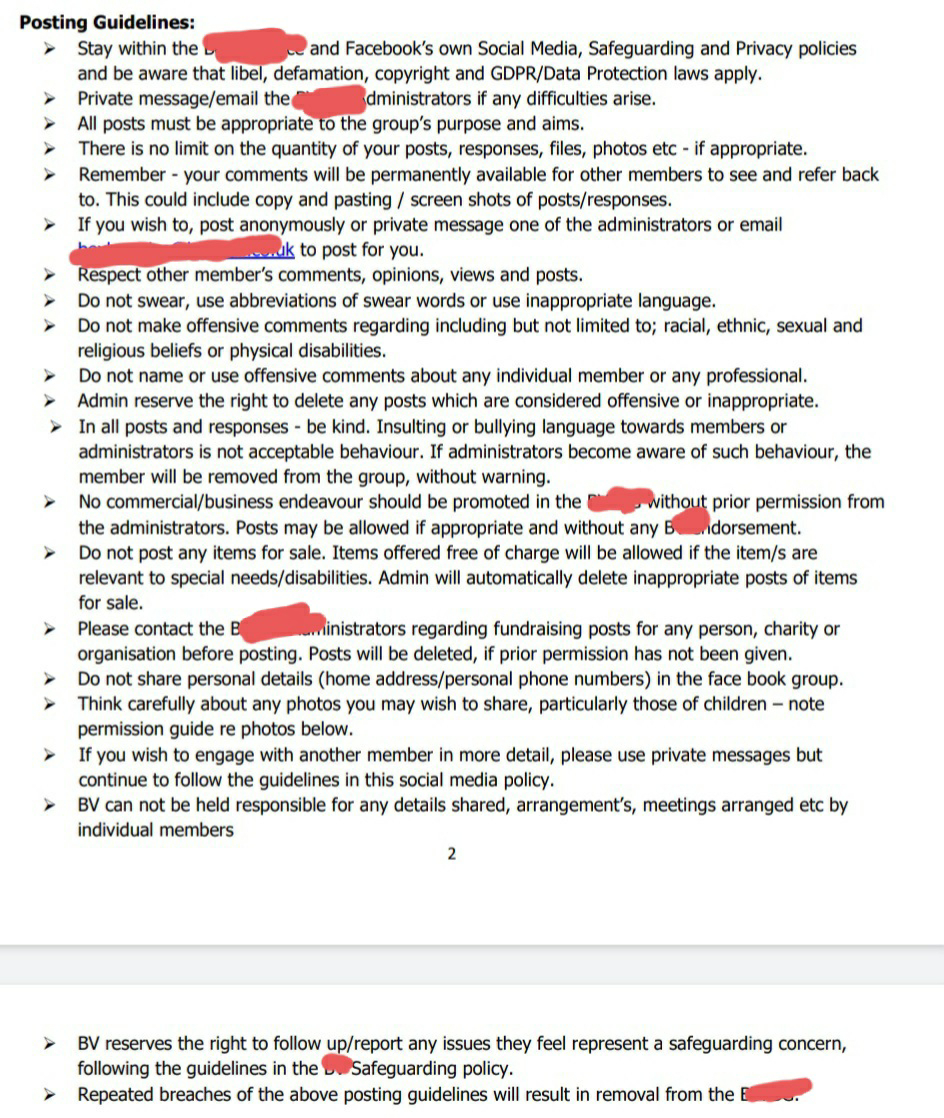 It makes sense I guess, but I was angry when I made the Facebook post.  Luckily, as regular readers will no doubt be aware, me and Facebook have parted company - permanently!
Posted by Publicservicefunblogs at 18:38 No comments:

So, it's January 2021 and the UK is yet again under Covid-19 lockdown for about the umpteenth time.  Is it annoying because Master Logic isn't at school - yes; am I getting bored - yes; is there anything which can be done about it - no.  Adjusting to what everyone is calling The New Normal isn't quite as bad for us Aspies when you think about it.

The broadband is playing up because it's overloaded - sigh!  Even Virgin Media cable is creaking.

Posted by Publicservicefunblogs at 15:53 No comments:

Publicservicefunblogs
To engage with me is to adore me. I am a quirky woman with a strange outlook on the world around me.