I am getting more and more fed up with certain people treating me like some kind of freaky nightmare.  Why is that you may ask?  Well, you wouldn't single out someone with severe, medium or mild learning disabilities and generally be a bullying cockwomble to them would you?  The trouble is with appearing (apologies in advance for the word) normal is that people mistake key social faux pas for rudeness, even if you've ALREADY TOLD THEM THAT YOU'RE AUTISTIC!

This came to a head recently when I encountered on a professional level, a person whom I'd previously worked with at a local autism charity.  I won't elaborate or name names obviously, but I felt pretty low last summer as a result of this particular person's unfeeling actions.  I'm sure that I can state, as a person with autism/autistic person that having a neurotypical 'so-called' expert talking AT you for ages about their own biased and quite frankly, outdated views doesn't do much for one's self-esteem.

Rant over.  As you were.


Posted by Publicservicefunblogs at 14:21 No comments:

My son, Master Logic, turns twelve on Sunday and as such, wants to be as normal as possible.  As we know the concept of being normal - is kind of lost on those of us on the spectrum.  I sent this angry Tweet/Facebook status today: 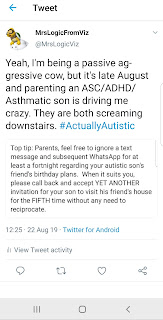 I'm sure that Master Logic's friend's mother has a really good explanation for not finding two precious minutes to reply to a message.  From our side though, Master Logic has been really upset about the whole thing, believing himself to have been ignored and pretty much friendless.  He's almost reached his teenage years and the fact that he's autistic is really starting to hit home because his neurotypical peers are out and about on their bikes, meeting one another for an ice cream and generally being kids.  It's hard for me to deal with as a parent on the spectrum myself - if it were left to me I'd rant and rave at others for their insensitivity, but I know that it would affect Master Logic's life, so I leave the 'soft skills' to my husband.


Posted by Publicservicefunblogs at 12:55 No comments:

Well, does she? Mine doesn't. This is what happened yesterday:

My parents came over to drop The Earl off last night and my mother berated me for daring to throw away a stained and mouldy rubber bath mat.  The aforementioned item was festering away in their holiday bungalow when we visited last month and we replaced it with a brand new one. She also expressed anger at the decision to replace a manky old plastic soap dish with a ceramic one as it would "crack the basin" when it fell off of the side.  I wouldn't mind, but knowing their crankiness, I left the soap dish in the bathroom for future use and the mat on one of the workshop shelves.

My mother is a deeply lazy woman who refuses to maintain any kind of housekeeping. She has always been the same and I grew up in a complete shithole of a house as a result, a place so rank and disgusting visitors were never welcome.
Posted by Publicservicefunblogs at 11:37 No comments:

Guess what readers? No?  Well, my latest choir isn't right for me either. Last week some old woman wearing an ill-advised combination of white skinny jeans and a grey blingy top decided to whisper something unkind in her sister's ear about my singing. I was pissed off enough then, believe me.

I'd normally blame myself and my Autism, but it's not altogether my fault in this particular instance because this lot are seriously cliquey. I'm not a thick skinned person by nature and being told rather rudely to 'shut up' whilst I was attempting to help sort out an audio issue was unpleasant. Also, if I'm asked whether I can follow the soprano part and I answer that it's easier to determine the harmony line on a musical score is my personal opinion. Yes, it may sound quite snobby, but it wasn't meant to be. Snarky comments about me being "too good for the choir" don't help either. Yeah, I'm looking at you, so-called treasurer.

Needless to say that I won't be coming back.

Posted by Publicservicefunblogs at 15:25 No comments:

Why is that?  Er, I dunno really.  What have I been up to?  Well, life goes on really - time certainly does fly.  During the first couple of years since taking redundancy I was rather lost and felt constantly guilty about not working, but I've rather got used to it now.  That's not to say that I'm a lazy slugabed who spends all of their time watching Glee whilst wearing a stained dressing gown - anyway, that was so last week.

I've settled into my role as co-chair of my borough's Autism Partnership Board - it gives me some outlet to use the skills I gained whilst working in the public sector.  I have also joined another choir and yes, before you start banging on, this is the fourth choir I've joined since 2010, but I'll write another blog post about choir stuff in due course.

My son, The Earl, or whatever he's called on here has developed asthma during the past week - currently the medics aren't sure whether it's seasonal or permanent.  It's certainly worrying and it keeps him up coughing all night.  Combined with his ADHD it's not the best thing as he tends to get worked up about this that and the other, plus it's nearly time for the school summer break.
Posted by Publicservicefunblogs at 22:11 No comments:

Regular readers may recall a previous reference to my maternal great aunt, or as I dubbed her The Home Counties Methuselah?  She's due to turn ninety in March and her son, who's in his sixties, is planning a birthday bash.  He wrote this in the Christmas Card to MotherLogic, but we weren't treated to this information.

There's a bit of background here: https://faspie.blogspot.com/2017/04/post-97-my-mother.html so I don't need to elaborate too much.  I'd only bore myself by doing that anyway.

If a big event is due to occur in March, wouldn't you have issued the invitations by now?  It's the end of January for goodness sake! If not, why not tell everyone that it's not happening?  It's flimsy nebulous thinking like this which irritates me about certain members of the allistic/nypical/neurotypical community.  I asked MotherLogic last night, but she didn't seem to know either, believing that it would go ahead.  Will it indeed?  If so, I don't think that I'll be joining the party.  So there!  I'll merely go off and sulk in front of my television.

I used to find it hard to socialise with MotherLogic's cousin and his partner anyway.  In the days before I knew that I was autistic, LogicTowers used to host family get togethers, mainly because it boasts ha - a lovely estate agent term - can you imagine a group of semi-detached houses meeting up in the pub and playing a game of one upmanship?) much more reception space than MotherLogic's abode and that we maintain a good level of cleanliness and tidiness here.  That last statement sounds bitchy, but it is brutally accurate.  As ever, I digress - quite frankly, CousinLogic and his partner are a bit too intellectual for my tastes anyway - think BBC Radio 3 and obscure art galleries and you'll get the picture.  His partner is also a very highly strung woman and that always makes my poor noggin hurt.

We received an invitation through the Great British postal system today and I've accepted on behalf of me, MrLogic, MasterLogic plus the two parental Logics.  It did adhere to the six week invitation etiquette.


Posted by Publicservicefunblogs at 12:28 No comments:

Do you, like me, sometimes sit back and think "why did I make that particular life choice?"  No?  I bet people do though - it's a bit like the Sliding Doors paradox, although granted, without the character played by John Hannah quoting the same lines from a particular Monty Python sketch and unbelievably, making all of the people surrounding him howl with laughter. 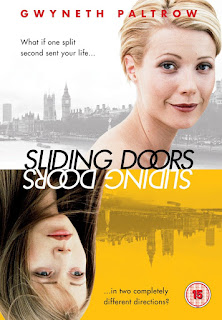 I wish that I'd done things differently at times, but it's too late to regret anything now.  I'm all grown up, more's the pity.
Posted by Publicservicefunblogs at 15:53 No comments:

Publicservicefunblogs
To engage with me is to adore me. I am a quirky woman with a strange outlook on the world around me.